“The coffee is absolutely disgusting because no one washes the container that goes out every morning,” according to WorseToWorser. “The station agents who get paid way too little don’t give a shit about cleaning it. I certainly didn’t when I worked for AA. Also, because we weren’t given the proper supplies to clean it. We pretty much just rinsed it out and dumped coffee into it.”

“Sometimes, the vehicle that fills the potable water for washing hands and making coffee is parked next to the vehicle that is used to dump the shitters and fill the blue juice for the lavs,” added Mudbutt7. “They’re not supposed to. Sometimes, they’re parked at a distance from each other, which is policy, yet the guy who is filling the water is using gloves that he hasn’t changed in over two years.”

Instead, consider your other options.

They are more bountiful than you may have expected.

“When the drink cart is coming through,” Emzam told Reddit, “you can ask for a full can of pop instead of the tiny little cup filled with mostly ice.” 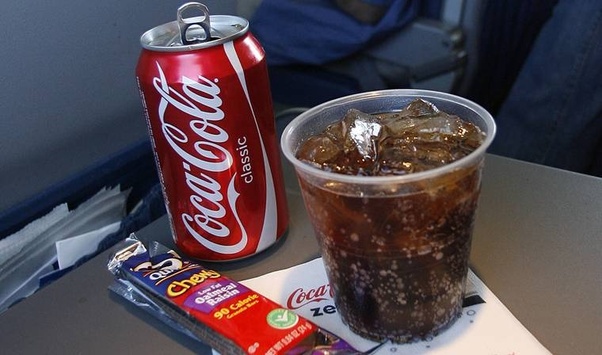 Kindness will get you everywhere.

“Flight attendant here,” ihatcoe said. “The nicer you are to us, the more we can do for you. Ran out of beef? Ask politely and we will get you a fillet mignon from first class. Your neighbour is noisy? Tell us nicely and we might be able to get you a better seat. You’re 35k feet in the air but you’d like to know the results of the game? Be nice and we can send a message to ground and ask. More often than not when passengers are aggressive and nasty we’d render minimal service and not extend more help than need be.”

“Be nice to the ticket agent and they will pretty much always let you get away with overweight bags,” according to WorseToWorser. “If you were funny, I’d even not charge you for bags.”

“People fake needing a wheel chair to gain boarding priority,” tagt8ersaid. “10 wheelchairs get on and only 1 person needs it getting off. We call um miracle flights.”

Best not to abuse this one.

“The most power you could probably wield is twitter,” according to Mudbutt7. “The employee in front of you has so little power to actually remedy tough situations. Baggage handlers are usually short staffed. As well, customer service agents are usually limited in their options. Also, it would help us get a message to higher ups because our work is not being supported as it should be. Hell, I’d even recommend asking an employee about the problem and say something like, ‘if I were to take my complaint to twitter, how could I phrase it in a way that would help you too?'”

Just because it’s in a wrapper doesn’t mean it’s clean.

A good rule of thumb for flying and for life in general.

“I used to work for warehouse that supplied a certain airline with items,” ichigo29 said. “The headsets that are given to you are not new, despite being wrapped up. They are taken off the flight, ‘cleaned,’ and then packaged again.”

Airplanes are so big because they’re full of secrets.

“On larger aircraft, there are secret compartments where your cabin crew and flight crew are able to get much needed rest,” FORDxGTtold the Reddit community. “This is the flight crew rest on a Boeing 77 and it’s located above the ceiling of the first class cabin. There are two beds behind the seats as well as personal entertainment screensfor each seat. This is the cabin crew rest of a Boeing 787 located above the economy class. Older Boeing aircraft have crew rest areas within the passenger cabin and I’ve been told some Airbuses have crew rests under the floor.”

Luxury. And that’s not all!

“Not particularly a secret but one time I was upgraded to business class on a plane that was delayed for maintenance,” shiningPate continued. “Just settling into my middle row/aisle seat up at the movie screen/bulkhead when a hatch in the floor of the cabin right at my feet flipped open and the maintenance engineer climbed up. He had a clipboard of paperwork for the pilot to sign, then climbed back into his hole, tipping his hat to the passengers before closing the hatch over his head. If you look for it you can see a recessed pull ring in the cabin floor in front of the first row seats behind cockpit.”

“As shown in some movies like Executive Decision and Passenger 57,” jatefromstakefarm said, “there is a secret hatch on every plane that allows people to travel freely throughout the aircraft.”

And the secrets don’t stop with passageways. More elbow room? You betcha.

“You know how all the other armrests can be raised except for the one next to the aisle?” Goat_Porker added. “Turns out that one can be raised as well via a small button in a divot on the underside of the armrest. Useful if you want to spread out a bit more, though some flight attendants may tell you to put it back in place.”

Also, for pervs and peeping Toms:

“There is a small latch hidden inside the lavatory sign on the bathroom door, which will open the door when pulled, even when it’s locked,” according to anony_mews. “Airplane Peekaboo!”

When traveling with animals, proper identification is a must.

“If you checked your Dog there’s about a 30% chance it’s terrified before it even gets on the plane, who knows how scared it gets during the actual flight,” RabbitMix told Reddit. “Bag room agents will usually try to comfort a scared animal, but all we can really do is talk to it, so if you write your pet’s name on their carrier it usually helps a lot.”

Not a dog person? Never mind, then.

“I’ve never seen a cat who was scared in the bag room,” RabbitMix continued. “Cats don’t give a fuck.” 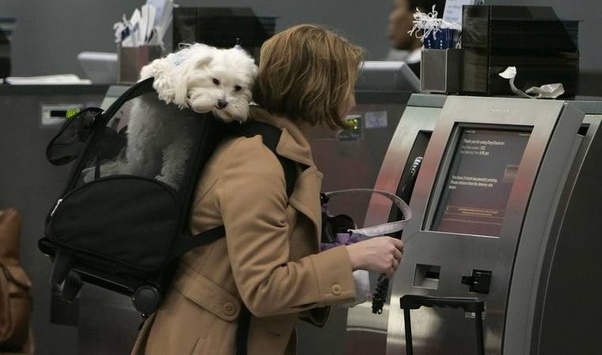 “There’s a huge list of things that can be missing from the aircraft while still being allowed to fly,” according to unimproved.

Indeed there is. It’s called the Minimum Equipment List, and as polarisdelta said, “the book is about as thick as your fist” and much of what’s in it qualifies as “sticker and go” — i.e., note that it’s broken and carry on as usual.

Comforting? Edwardshinyskin — in “aerospace fastener production” — said not to fret.

“Nobody ?ver asks what is actually holding th? plane together. Don’t worry ?bout it.”

Because there are other safety measures in place.

“2 pilots are served different meals and cannot share,” said ichigo29, “this is done in case of food poisoning.”

Which is not a given with all airline food, apparently.

Not so much for your luggage, though.

“Invest in quality luggage,” paradoxofchoice said. “You are the only one that handles your bag with care. Your bag is going to take a beating in the system.”

“Bags are not intentionally harmed,” Mudbutt7 added. “They are, however, intentionally thrown, slid, jostled, stacked under hundreds of pounds of other bags, and exposed to the elements because that is the nature of the job. You can safely assume that your bag is touched and handled by at least 7-8 people, per flight segment, if you are connecting, at least 10 different people, not including TSA.”

“Here’s a short clip of what it looks like when you’re bag goes down that belt,” lubeskystalker continued. “Very modern airport, they’re not all like this.”

This one is like a roller coaster for luggage. It’s sort of surprising that any bags ever make it to their destinations, considering.